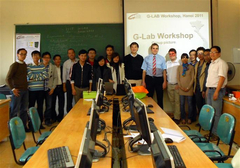 On December 1st and 2nd, a German-Lab Workshop was held in Hanoi, Vietnam. David Hock (University of Wuerzburg) and Dennis Schwerdel (University of Kaiserslautern) presented the project German-Lab as an example for a national Future Internet project, including the general project structure, the experimental facility, and the technical administration background. In the practical part of the workshop, the participants had the possibility to directly get to know the software used in the experimental facility, in particular private Planet-Lab and the Topology Management Tool (ToMaTo). The range of participants was wide spread: not only lecturers and students from different universities (HUST Hanoi, VNU Hanoi, and HCMUT Ho Chi Minh City) but also developers from local software companies participated in the workshop. After the workshop a consortium in Vietnam plans to set up a national project similar to German-Lab.